Start a Wiki
Chuck is an American twin-rotored helicopter. He comes from America and of course, doesn't understand much British English well. He sometimes gets cocky and likes to show off, but this led him to trouble when he disrupted an air show and finished up in a pond. He also has a bad habit of calling Lionel Captain.

Chuck has appeared in every episode of Budgie the Little Helicopter to date, except for The Runaway Train.

Chuck is based on the Boeing CH-47 Chinook. These helicopters are commonly used for military purposes. 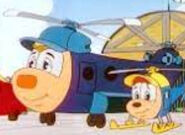 Budgie with Chuck
Add a photo to this gallery
Retrieved from "https://budgie-the-little-helicopter.fandom.com/wiki/Chuck?oldid=4837"
Community content is available under CC-BY-SA unless otherwise noted.