The Budgie the Little Helicopter kiddie rides are coin-operated toys from Mitchells Children's Rides (formerly R.G. Mitchell), while two Budgie designs were made by Kidzstuff.

One model is of Budgie himself (1994), while the other model is of the Black Rock Lighthouse (1996). The Budgie ride has 2 joysticks to make him say 4 different phrases. Some Budgies have 2 black joysticks with 2 red pushbuttons, while some have red joysticks with no buttons. The buttons on some Budgie models make Budgie say a phrase, while the joysticks on all models make him say a different phrase. The phrases included are: "Budgie to Pippa, come in Pippa!" "Juddering Joysticks!" "Wheeeee! This is fun!" and "Rocketing Rotors!" This ride has flashing LED lights inside the cockpit that light up along to the music inside the dashboard. The Black Rock Lighthouse ride is an interactive kiddie ride (similar to Snow White's Enchanted Castle, Musical Mushroom, and Flounder, also by RGM) which is extremely rare and hard to find, with a semi-circle rotating movement, an interactive memory game with 8 pushbuttons, and characters Pippa, Oliver, Chuck, Budgie, Lionel, and Jean Claude on the outside of the lighthouse, who also appear on the game. Both rides play the theme song.

Single and double seater versions of Budgie himself (1997) were made by Kidzstuff, with two character phrases: Budgie saying, "Rocketing Rotors!" and Chuck saying, "Gee, you guys are slow!" and played the theme tune while the ride was in motion. The R.G. Mitchell version of Budgie was more popular in the UK. 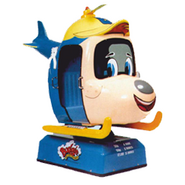 Black Rock Lighthouse (Prototype)
Add a photo to this gallery

Black Rock Lighthouse
Add a photo to this gallery
Retrieved from "https://budgie-the-little-helicopter.fandom.com/wiki/Budgie_the_Little_Helicopter_Kiddie_Rides?oldid=4688"
Community content is available under CC-BY-SA unless otherwise noted.